The House Plan Shop is offering $20.00 OFF shipping on the initial purchase of any blueprint. Simply enter or mention this promotional code when placing your order: 01H13

If you are looking for our garage plans, please check out our new site: thegarageplanshop.com.

If you're a history buff, or someone who appreciates American architectural styles, then you're probably very familiar with the Colonial style home. The Colonial house plans at THPS include Georgian, Williamsburg, Federal and many other colonial architectural styles. Our colonial house plans are designed by some of North America's leading architects and designers, so you're sure to find the Colonial influenced home of your dreams.

Perhaps the most widely recognized feature of Colonial house plans is the evenly spaced white columns in the front of the home. Other common design elements include a symmetrical design with windows that are spaced around a front door and columns in the front. However, in modern day architecture, there are many variations of this style, some of which include Southern and Cape Cod elements.


Southern house plans: Not just for the South 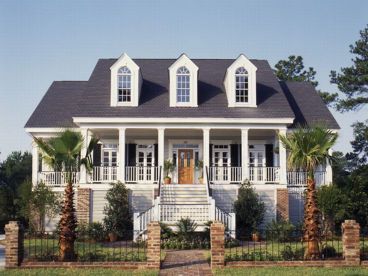 Southern style homes are not just found in the southern US, they can be found in almost any geographic location. Southern house plans are very versatile and include well-known variations such as Charleston, Confederate, Georgian and plantation. These homes can have either a siding or brick exterior, and historically the chimney is placed to one side of the house.

There are quite a few other variations of Southern house plans, but those that include some of the above mentioned characteristics are considered subsets of the Colonial style home.

Much like Colonial and Victorian style architecture, Cape Cod design elements have transcended their birthplace and can now be found all over the United States. Cape Cod house plans are often one story or one-and-a-half story designs that include decorative elements on the exterior which give it a distinctly "Cape Cod" feel. These decorative elements can include shingle or clap board siding and dormers.

For more information about our Cape Cod house plans, or how to further modify other plans to include Colonial architectural elements, contact us today!